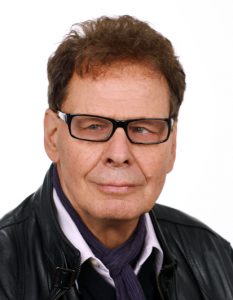 Mr Bernhard Beutler and his wife spent a great part of their life in Canada.  Today Mr Beutler writes articles for the DKG Journal and is very active within the cultural scene.  Discover the fascinating story of someone who personally met Marshall Mcluhan, Glenn Gould, Margaret Atwood and many other Canadian personalities.

Mr. Beutler, please tell us about your professional “parcours” and waypoints.

Born in Hamburg, Germany in 1936,  I attended a local Volksschule and later Gymnasium in Hamburg. My studies in Philologie led me to places like Frankfurt, Paris, Toronto, Oxford and Munich (English language and literature, History, Theology).  Initially, for four years, I taught German language and literature at St. Lawrence University In New York State, just south of the St. Lawrence River, and at the University of Western Ontario, where I also obtained an MA…in German literature.

My studies towards a “Dr. phil.” (Hamburg) in Canadian Literature led me to move to the Montreal area in order to be able to do research at the National Library in Ottawa– then still! – highly open and welcoming.  By mere chance I got a teaching post at the Goethe-Institut Montreal. My wife Hildegard, “imported” from Germany, could also teach there and at various CEGEPs.

The concept of bringing nations and people together through cultural cooperation – after the horrors of World War II – attracted me highly, not as a profession but as a vocation, particularly in Europe where reconciliation had to be the main agenda. Thus I stayed with the Goethe-Institut, a government-sponsored cultural organisation until my retirement, initially in teaching positions, later with then  higher responsibilities, for example the Press Office in the Munich headquarters, 1984 – 1988, then directorships in Bergen /Norway, Lyon/France and, finally, in Brussels/Belgium.

You lived in Montreal /Canada for many years. Please share with us what brought you overseas and when and for how many years did you stay?

Well, the topic of the main essay in my Abitur at a Jesuit college in Hamburg was: “ Zufall, Schicksal, Fügung –eine Begriffsbestimmung” (coincidence /fate/providence). In hindsight, it was due to providence that I encountered a group of Canadian tourists being on a “pilgrimage” throughout Europe and which was attending the so-called “Eucharistic Congress” in Munich in 1960, a huge meeting of Catholics gathering on the field of the famous Oktoberfest.

I accompanied this group to various places, translated speeches and talks – in short my first encounter with “real Canadians”. In parting I was offered a private scholarship as a guest student for a semester at St. Michael’s College,  University of Toronto (winter 1961/62). The fountain at the University of Munich where this invitation was formulated is now, in retirement, on my  walk or bike-ride towards the Englischer Garten, the local park in Munich.  Thus I stay almost physically connected with my beginnings in Canada.

Arriving in Canada by boat was as magnificent as the impressions of the vastness of the landscape and skies. No fences! And for the most part not in the minds of people either!  – What a contrast to good old Germany!!

This semester at U of T was decisive. Imagine: only 16 years after the war a young German would be welcomed abroad, given all sorts of aid-, from a beautiful home within a Unitarian family in Neville Park,(a few steps from this vast lake Ontario), the access to Hart House with concerts and swimming-pool (I still use the same lock from the locker-room in our basement today…(Aah,nostalgia!) . The visits to a hockey-game, rowing on a lake in Algonquin Park, etc. etc.: many contrasting events! – It was unbelievable!  But also my first encounters with Jews having fled Nazi-Germany: “We have forgiven, but not forgotten: Never again!” …

In this short semester I enjoyed taking part in small seminars with Marshall McLuhan (with visionary predictions of a digital world to come, and an intuitive seminar on  the Victorian poet and priest G.M. Hopkins), with Etienne Gilson at the Pontifical Institute of Medieval Studies (on music), and  with the late Professor Gregory Baum (on Ecumenism). Through him I even  met briefly once with the Right Honourable George Vanier, the empathetic  Governor General. One highlight was attending a Glenn Gould repetition on  the stage of Massey Hall with him humming along… I felt that to be odd. In the end my first predictions on the future of both McLuhan and Gould were proven wrong…as both turned out to become cultural “lighthouses” of Canada…

After this semester in Toronto I knew I wanted to come back to Canada.

Then coming from Upstate New York my wife and I applied successfully for the status of landed immigrant to Canada in 1969.  We stayed  for nearly 10 years, first, studying and lecturing at UWO in London, afterwards at the Goethe-Institut Montreal. It was the poet Ronald Bates at UWO who strongly suggested I should take up my research on Canadian literature  in the Ottawa-Montreal area – and, in fact, this advice turned out to be most fruitful…

If I am not mistaken you were in Montreal during the quiet revolution and the famous ‘Vive le Québec libre’ from General de Gaulle. How was it for newly arrived foreigners and how much has changed since then?

In fact I arrived as a guest on a freighter from Europe in Sorel, Québec, in fall 1967, still during the Expo “Man and His World” in Canada, shortly after De Gaulle’s famous proclamation. When we moved definitely into Québec four years later, indeed, people in Ontario were asking, how we could dare to go to Québec, and even take up residence in Longueuil, where Minister Pierre Laporte had been killed in 1970. But having survived the war, having experienced blow-ups of electric facilities in Alto Adige /South Tyrol, we were not afraid, but mainly attracted by this immense St. Lawrence River which we could oversee from our balcony. We were taken by its vastness, by the Jacques-Cartier-Bridge, and by the fabulous 7- minute ride by Metro from Montreal Island to the south shore – but had to get used to the “Joual”…

Surely, the city was sharply divided at that time. Hugh MacLennan once wrote about the “Two Solitudes”. During the seventies we encountered the debates  around Loi /Bill  101, the status of the English language in Québec etc. All that has changed remarkably.

To my Montreal years, I owe enriching studies in Canadian literature, and my decisive friendship and long-time correspondence with LOUIS DUDEK, professor at McGill University, poet and essayist.  Dudek also introduced me to his former student Leonard Cohen, to Michael Gnarowski, renowned historian of modern Canadian literature, and to Pierre DesRuisseaux, whose pocket book “Dudek, l’essentiel” inspired me to publish, much later, a bilingual English-German edition of poetry by Dudek (“Louis Dudek – For you, you- Für Dich, Dir”, Elfenbein, Berlin 2006).

I remember being much impressed by very relaxed and informal encounters with Canadian authors such as Margaret Atwood (recently honoured with the Peace Prize of the German book trade) and Mordecai Richler, Dorothy Livesay, Marie-Claire Blais and others.  Also, by comparison with German university structures, the openness of academic institutions in Canada offered me great enjoyment – and I profited from them highly.

Montreal has since become a fascinating, multicultural “phare”, a light-house in North America! We regard Canada and Montreal as our second home.

I’ve  mentioned already the vastness of the landscape and skies, partially also of the minds of Canadians. It happens that now the son of Pierre Elliott Trudeau has taken up office. His father managed to change from one language to the other in the middle of a sentence. Both display openness, liberty, probably few hypocritical traits, and sincerity –  thus a higher degree of credibility.

I recommend to young people that they immigrate to Canada – as I did in 1969.

In Canada, certain feasts like X-mas, birthdays etc. are celebrated differently. (Spontaneously being invited to “come on over for an eggnog” on a nostalgic Christmas Eve surely was a surprise!) On that level I miss somehow the big family gatherings for a Thanksgiving dinner…

Here in Europe, in general, sometimes interpersonal relationships/friendships tend to sink in “deeper” in their feelings. On the other hand, in North America, it was/ is so easy to quickly get to know the unknown neighbour…

What are your favourite places in Canada and Montreal and why?

The steps down the ladder from Neville Park in East Toronto to Lake Ontario is certainly my No. 1; also the terrific international waters at the Thousand Islands which we cruised several times until lately.  And: the lonesome Isles de la Madeleine where I started to write my PH.D.thesis.

In Montreal we crossed the Jacques Cartier Bridge ever so often. Bridges also have symbolic values, often overlooked.- And there is this quiet place, the Square St. Louis with its almost Roman fountain, the statue of Emile Nelligan nearby, the painted roofs on the old stone mansions – a place of meditation and reminder of “old Europe”.

What Canadian aspects would you like to bring to Germany and vice-versa?

If Canada has not changed too much over the last few years when I could only briefly visit the country, it is surely the spirit of openness, down-to-earth-decisions, fewer hypocritical arguments, spontaneity in relationships,

In Canada, maybe, more transparency in city planning and developments, cleanliness, improvements to the railway system, and, so we hear, the safeguarding of the health system might be envisaged. But I am not an expert in these areas.

What qualifies Canada as an interesting destination for German professionals today?

Here I am as a retired old man no longer qualified to answer. It must be,  however, taken in to account that in the so long postponed debate on an immigration concept for Germany a quota system as the one in Canada is often being proposed. There again, it is a certain hypocritical and bureaucratic attitude in German debates which hampers overdue decisions here.

Looking back on your Canadian adventures, what would you have done differently and what are your most valuable lessons?

I should have fought much more strongly for a dual nationality and passports – at that time when a Canadian university offered me a post if I acquired the Canadian citizenship; the German government, however, then still refused a dual status.

I began to answer your questions on the Canadian Thanksgiving Day: I owe Canada most of our closest friends, generous, often spontaneous hospitality, multicultural experience, openness, vivid and frank discussions on poetry and politics, an appreciation of the solitude and beauty of the often vast and almost “unlimited” Canadian landscape, often also in thoughts and visions  – in short, Canada  remains THE essential part of my biography, a “promised land” – and “un rêve”!