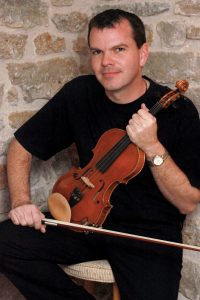 Scott Woods and his band travel across Canada every year and they help raise money for various charities. They change their show twice a year so the material is always fresh and new.  Scott comes from a family of musicians. He plays seven instruments and has won numerous prizes.  This fall will be his first tour in Germany. (See in „Veranstaltungen“ from September 21st on).

You will be touring Germany for the first time this September / October.   What are your expectations?

Yes this will be my first time in Germany.  I did play at the International Country Music Festival in Zevenbergen, Holland back in the mid-90’s but other than that, our touring has been in Canada and the United States.  I am really looking forward to seeing the country and meeting the people.  I’m not sure how they will react to Canadian Fiddle Music but I’m sure the danceability and melodic lines of the old time tunes will get their toes tapping.  It is very happy music and very contagious.  The melodies are simple and easy to get stuck in you head and before long, I’m sure many people will be humming the tunes.

You have been playing the fiddle and many other instruments since you were very young.  Which one is your favourite and what other instrument would you yet like to learn?

I started playing violin at age 4 – I remember I couldn’t wait to start.  My dad played fiddle and mom the piano.  My 2 sisters and my brother were already joining mom and dad onstage and I wanted to go too.  We all studied Classical music as my parents knew that a solid foundation in technique would make us better players.  But as a reward for practising the scales, studies, etudes etc., dad would teach us fiddle tunes.  It was so much fun to play and listen to.  Because we had a family band, there were times when we needed another instrument to be played.  I played drums a lot for a while.  I also played bass for many fiddle jams.  I still enjoy playing drums and bass on my recordings and with other bands from time to time.  Although I can play piano, clarinet, saxophone, mandolin and guitar… I rarely have the opportunity to perform on those instruments. Sometimes while recording I will need a track and just grab a guitar or play some keyboards.  I have often thought about playing the bagpipes, but I’m not sure my neighbours would appreciate me practising them. (I like to practise late at night!)

What is your ultimate goal/dream as an artist?

My music is not main-stream.  I certainly have a niche market in North America.  My fans are very loyal and dedicated.  So my goals as an artist are really to keep fiddle music alive by continuing to present high quality entertainment for my fans and introducing the music to new unfamiliar fans.  I also wish to make a contribution to the continuation of old time fiddling by composing tunes and by having young fiddlers or step dancers on my shows – it gives them an opportunity to perform and fine tune their art as well as grow themselves as an artist.  Many young performers I have had on my tours now are performing professionally and touring on their own.  I guess if there was one „bucket list“ dream for my playing, it would be to perform on the Grand Ole Opry in Nashville Tennessee.

You have been touring all across Canada for quite a while, what are your favourite places and why?

I have performed since I was about 5 years old.  We started travelling & playing outside Ontario when I was a young teenager and in 1986 at age 15 I was hired as the headline guest artist at a big fiddle festival in Carman Manitoba.  I have travelled across Western Canada about 40 times since then and in the Maritime provinces about 30 times.  I have yet to perform in Newfoundland and the Territories.  Canada is a beautiful country and very big!  There is always lots of driving between shows.  I can be several thousand miles from home in Canada and still feel very much at home.  The people are all very generous and gracious.  They are appreciative of our music wherever we go and although we don’t see many of the tourist-type attractions because our schedule is so busy, the geography we see going down the highway makes the trip worthwhile.  So I don’t really have a favourite place – they are all beautiful.

Music was always a part of you since both your parents were musicians and your siblings too.  But was there ever a moment in your life when you thought of doing a different profession?

When I went to University, I decided that I did not want to play music for a living.  I wanted artistic control of my music and I thought that „having to play“ would eliminate that.  So I studied business and marketing.  I got my real estate brokerage license and followed my parents in the real estate industry.  I still own that business today.  But in the late 1990’s I was teaching fiddle, recording, composing and performing a fair bit.  My real estate career started to take a back seat.  Soon the balance shifted to touring more and selling houses less.  By 2005 I basically was doing full-time music.  I still like to buy and sell a few properties myself and my brother still has an interest in our real estate company but neither of us spends very much time with real estate these days.  When my band travels now, we have a big 45’ tour bus that I bought 10 years ago.  I like to drive and do all the driving of the bus.  I often thought that if I wasn’t playing music, perhaps I would drive a truck for a living.  I guess the bus will have to do for now!

If you could choose a place to play anywhere in the world, where would it be and why?

I am very excited to be playing in Germany.  My hope is that we will introduce Germans to Canadian Fiddle Music and be able to expand our tours to other European countries in the coming years.  I love to travel and see new places and even though I will continue to travel in North America, I would be very happy to spend more time on the road in Europe (and other places) with my music.

what songs are always on your personal playlist when you prepare your phone/mp3 device for a trip?

I listen to fiddle music of course, but also to Traditional Country Music and Western Swing.  I love the chord progressions in the swing music.  It allows for very tight harmonies and there is just something about the beat.  Big band and jazz are great too although I am more a fan of the old dixieland jazz as opposed to the more modern style.  My favourite is getting a new fiddle album and seeing what the artist has done to some old standards or what new tunes they have created.

which musician would you like to jam with and what would be the songs you’d play together ?

I think if I could, I would go back in time and jam with the great fiddlers from a generation or two ago.  Canadian Fiddlers like Don Messer, Al Cherny and Graham Townsend would be at the top of the its (I did perform and record with Graham Townsend).  But other great fiddles too – Winston Scotty Fitzgerald, Joseph Allard, King Ganam.  And American Fiddlers Chubby Wise, Kenny Baker, Roy Acuff, Bob Wills, Johnny Gimble. 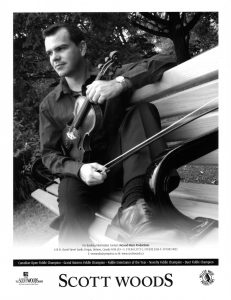 These are the artists I listened to and learned from and I suppose the ones I admire the most.  I would love to play the old tunes they recorded back in the 40’s 50’ 60’s.  I have had the pleasure of working with a few of them but it was many years ago and I did not take advantage of the opportunity as I was very shy.  But I remember standing back stage with Kenny Baker and Chubby Wise – just chatting with them while another performer was onstage.