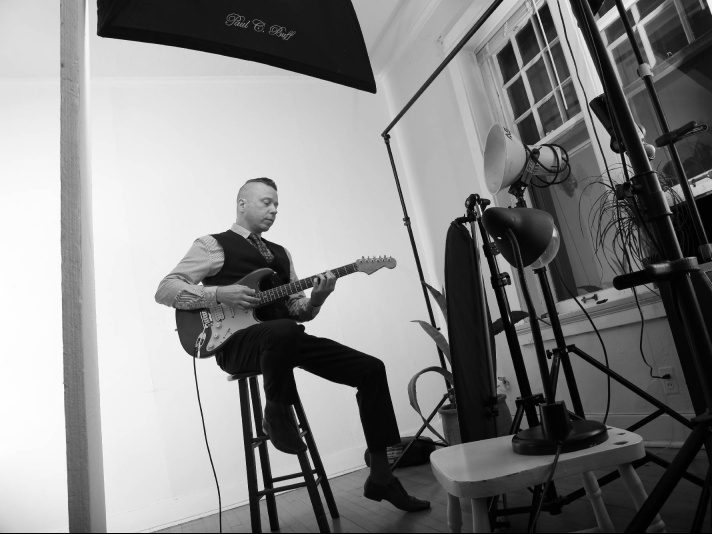 Chris Ladd is another great talent from Winnipeg, Manitoba who has been living in Germany for the last 2 years. An accomplished guitarist, singer and songwriter not to be missed at one of the many venues he plays in the country and especially at the DKG Night of Canadian Music this coming  October in Cologne….touching, funny, witty, very talented: pleasure guaranteed!

Tell us how and why you decided to become a musician?

When I was in Grade 4 my best friend Brad Southam brought his guitar to school. He took it out in class and all the kids crowded around him to watch him play. It fascinated me. We became best friends and took guitar lessons together. I just thought guitar was the coolest thing in the world. It brings people together.

And the first time I saw a picture of Eddie Van Halen doing the splits in the air after jumping off of his Marshall stack – that blew me away.

I have many of course. Before I started to sing I really played and practiced a lot of guitar. Sometimes up to 16 hours a day or more and for months.

What brought you to Germany?

It was a series of circumstances. I had always wanted to live somewhere in Europe but never really knew where. I toured a few times in Europe. A friend of mine from Winnipeg was living in Kassel and gigging. He introduced me to a great community of people into the arts scene. So it was just easy and made sense to situate myself in Kassel.

What do you miss the most from Canada apart form your family and friends?

I miss the lakes of Manitoba and Ontario in summertime. You can drive any direction and find a beautiful large body of water to swim in and sit in the sun and camp – within 45 minutes.

And I really miss Winnipeg’s river skate. I love a really cold winter however they last a little too long.

And the pillows. I really need a North American pillow.

What do you appreciate the most in Germany?

I appreciate how supportive, accepting and interested the Germans are in art, culture and people. I have been lucky as I have had very positive experiences so far. The landscape and old architecture are amazing. I also love how connected everything is – the transportation systems in and outside of cities.

Who is your favourite Canadian artist, why?

I would have to say Neil Young in terms of songwriting. His voice is very unique and not so typical. He doesn’t worry too much about if he is singing with perfect pitch. He just sings. And his songwriting is simple and very clever. He really paved the way for musicians who have no interest in conforming to a specific model of how you should be as an artist. Or how you should look or sound. To me he seems to have had the perfect career in this respect.

In terms of guitar influences, I have to say Lenny Breau. He is so unknown, from Winnipeg, and one of the greatest guitarists ever. Early on in my guitar studying I had heard of him and when I first listened to his playing, I was astounded at what he could do. Playing all styles and a complete master on the guitar. I was just fascinated with his complete dedication to his art and his ability. It was so inspiring.

Who is your favorite German artist, why?

I have to say ‘Can.’ They were just so far ahead of their time and so innovative. It is like they wrote the template for part of modern rock music.

If you could perform with any German artist, who would it be and why?

I would love to play with the Scorpions. Either as one of their guitarists or as an opener. I really loved them when I was a kid. Their songs were the right kind of ‘heavy’ and really catchy. I loved the guitar playing and the singing was awesome. Just a great metal band.

What is your ultimate goal as a musician?

…to be able to play until I take my last breath. I hope that I can live to be eighty something or older and still play some shows, write songs and record them. I hope to play around more of the world. It would be nice to make a living off of just playing music but this is not so easy. It was my ultimate goal to come to Europe to exist as a musician and I have been lucky enough to achieve this.